Built to represent the Oceti Sakowiŋ, the Seven Council Fires of the Great Sioux Nation, the cultural center’s seven tipis rest along the water’s edge. Tipis along the river also echo the encampments of the past, a permanent reminder that the Shakopee Mdewakanton Dakota are people of the water. 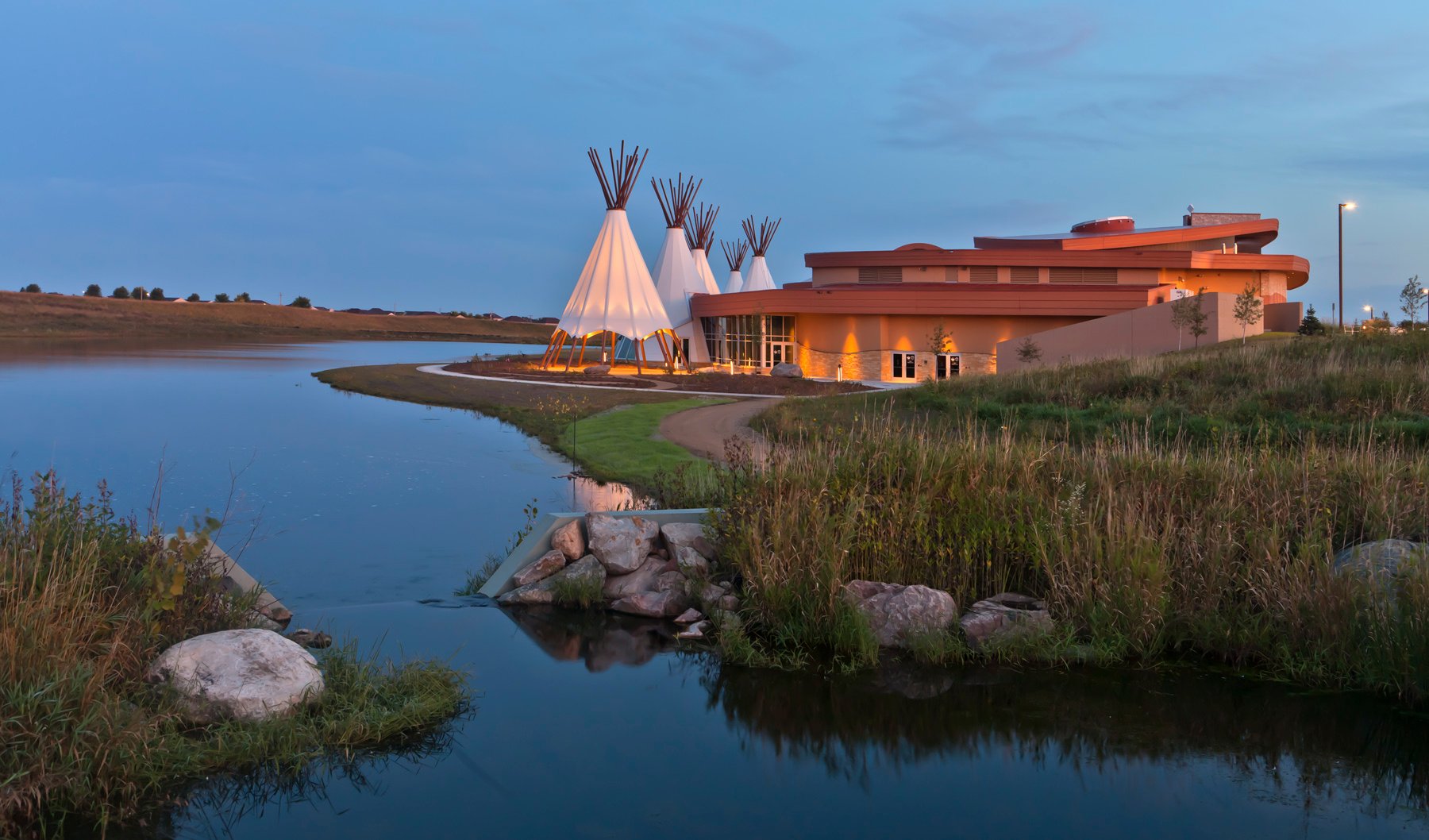 Connecting history to architecture and embedding cultural significance into design were primary components of Hoċokata Ti, the Shakopee Mdewakanton Sioux Community's cultural center. As a project, it was decades in the making and relied on the experience and expertise of many project partners. Today, it stands as a testament to what is possible when listening and serving are at the center of a project.

Decades in the Making

The timeline for Hoċokata Ti began long ago. It was already in motion during 2013 when the results of a land use study determined the ideal site for the tribe’s cultural center. 20 years ago the SMSC Business Council, with approval from the General Council, began setting aside funds for a future cultural center. This action put financing for the center officially into motion. Still, some may say, the beginnings of the center began long before.

Following in line with the Shakopee Mdewakanton Sioux Community’s tradition of planning for the next seven generations, the tendrils of what would become Hoċokata Ti are rooted much deeper than any of us are aware of.

Regardless of where one pinpoints the building’s origin, this facility is complete. Yes, Hoċokata Ti is open. 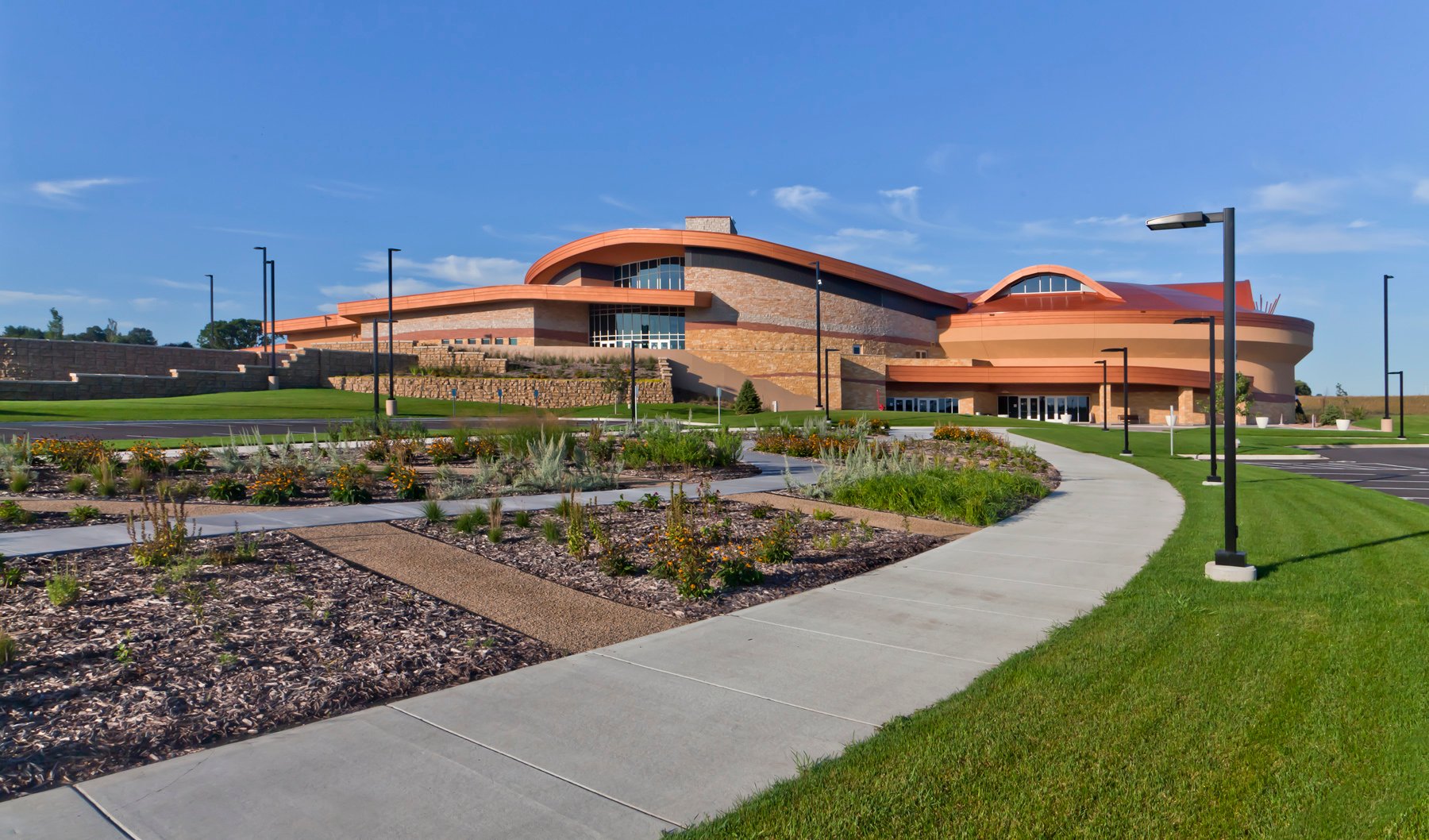 Hoċokata Ti, translated as the Lodge at the Center of the Camp, is filled with many multi-use spaces that enable the community to gather as a whole, teach and train the younger generations and share their history with the public.

Year-round, a 3,805-square-foot exhibit shares the SMSC's history and stories with the public, reserving the rest of the building, outdoor trails and gardens for Community Member use only. These spaces are used to store artifacts, host community events, gather for activities and teach language, history and arts.

The Shakopee Mdewakanton Sioux Community Cultural Center is an almost 85,000-square-foot building. Unique and organic in its structure, Hoċokata Ti is literally one of a kind. 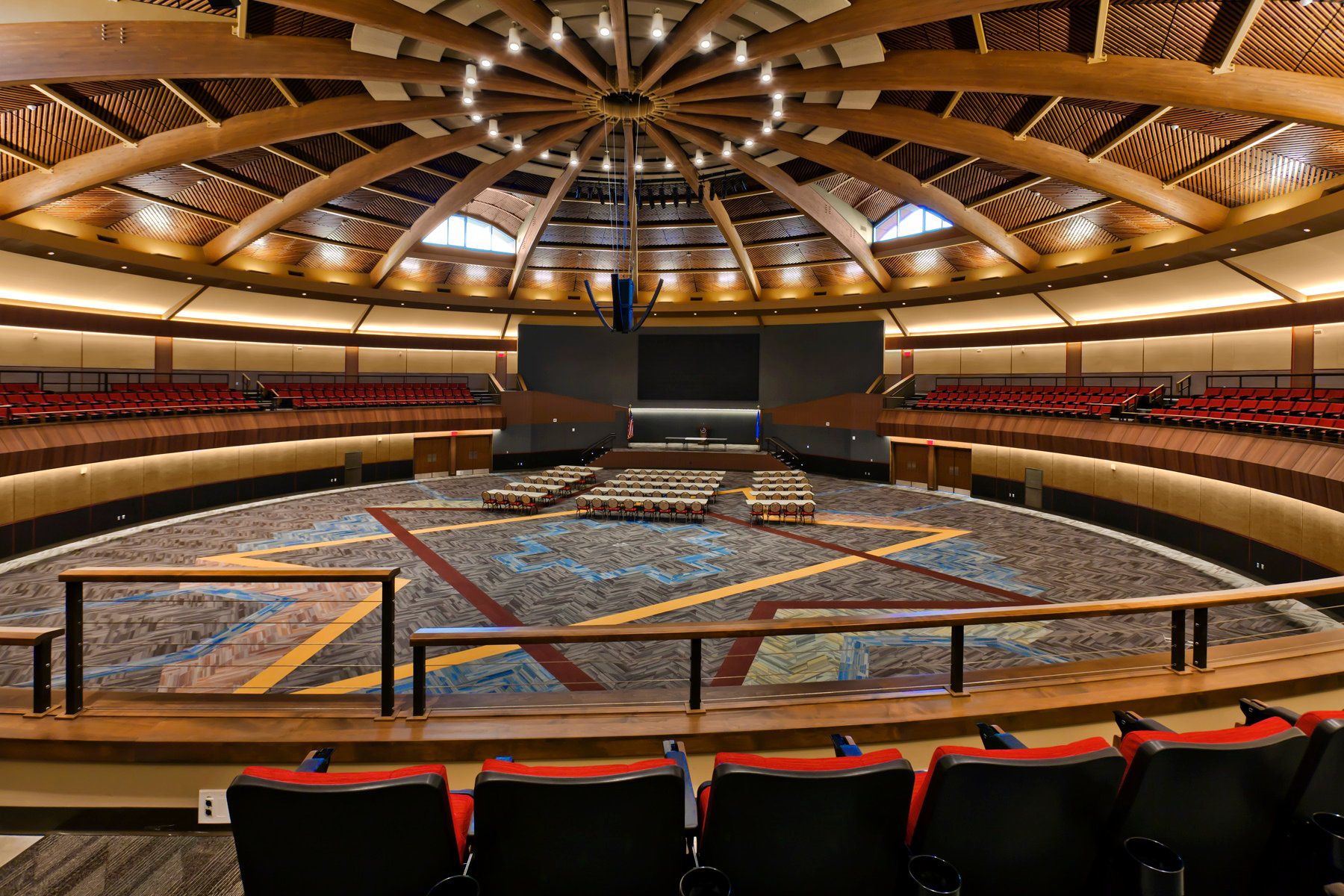 As the community’s architect for nearly 30 years, HTG Architects was trusted to ensure this project was built to their standards while adhering to their defined budget and schedule. Our role in the project began over five years ago, when we shared feedback on the design and began the process of managing the construction documents process.

WORTHGROUP, the design architect on the project, designed a building that radiates the spirit of the SMSC members. The building boasts of their commitment to their natural surroundings, with an exterior design that appears to grow from the land and uses regionally sourced materials that mirror the strata of the Earth at the building site. True to their intentions, interior spaces repeatedly incorporate meaningful symbols and traditions throughout.

With construction wrapping up in 2019, and Hoċokata Ti’s grand opening occurring soon after, we remain ready and available to address any questions, concerns or needs as the facility is used. 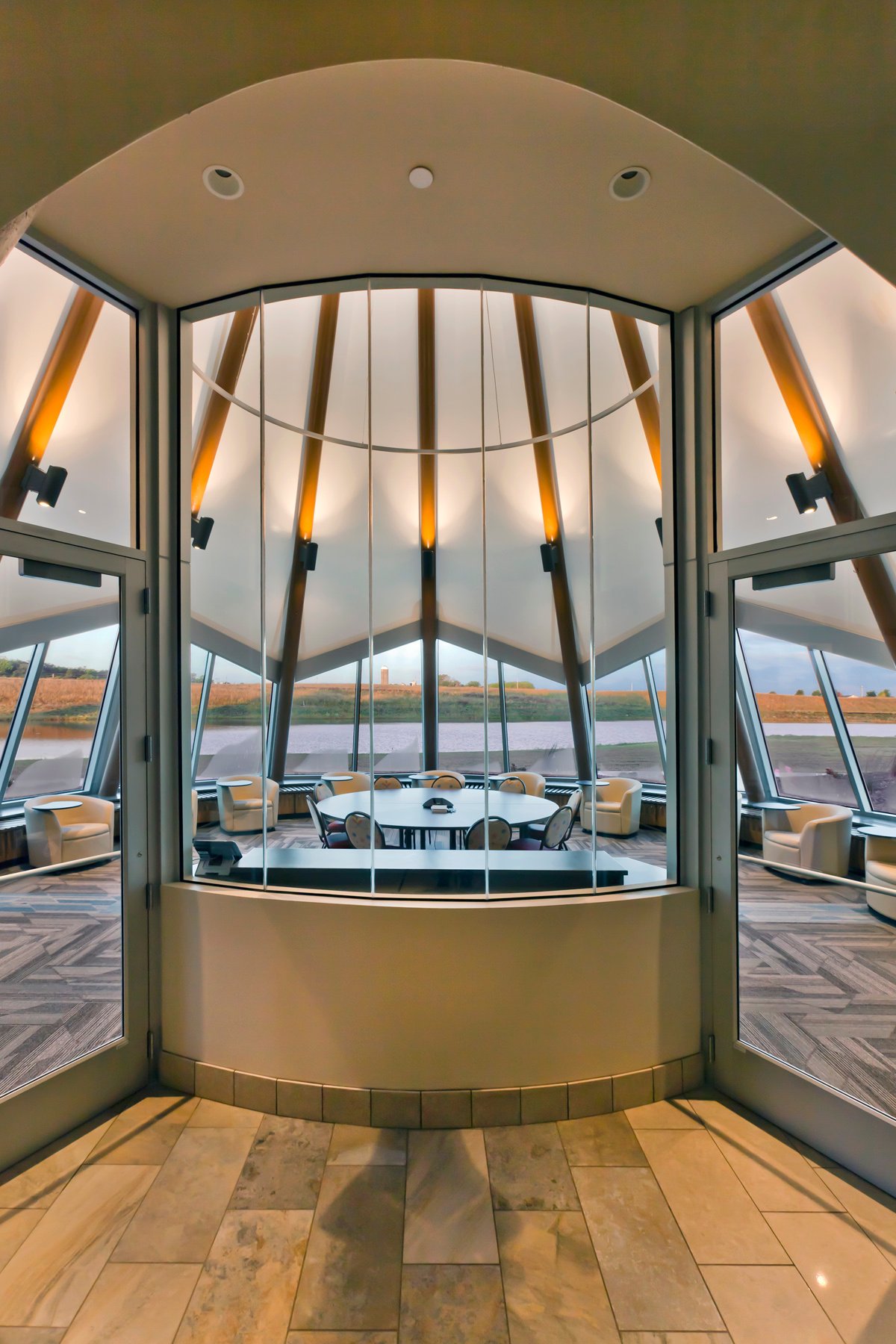 In addition to the seven tipis along the water’s edge, there are ways the Shakopee Mdewakanton Sioux culture was built into this building.

The cultural center’s main entrance opens to the east, which is the customary direction for the entrance of a tipi to face.

The building’s organic structure, utilizing smooth, sweeping design elements and appearing as if it is part of the natural landscape from which it rises. In fact, there is only one right angle of the exterior perimeter wall in the entire building.

The entry area skylight tips to the west, allowing the sun to shine through the colors which symbolize the four cardinal directions. 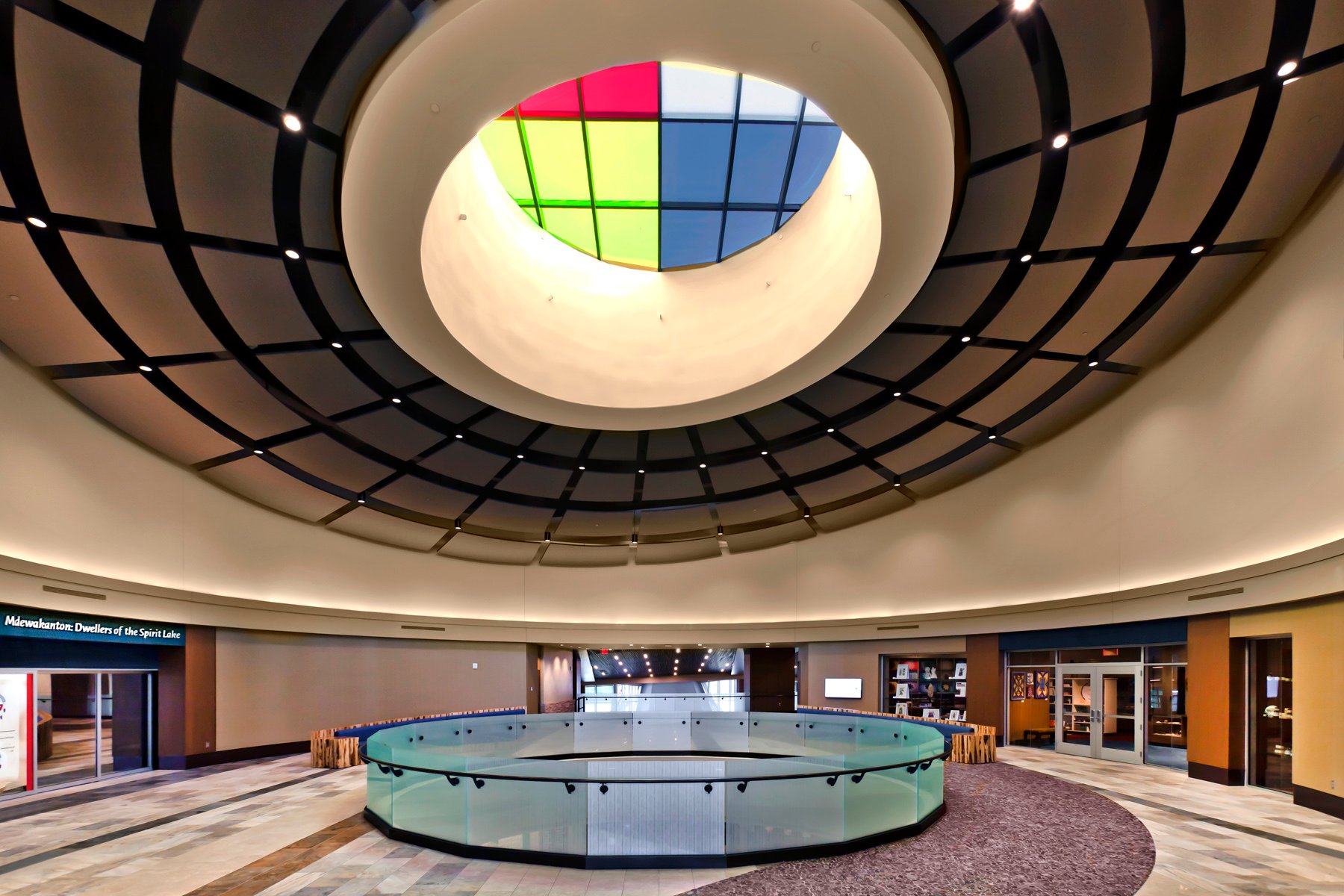 The circle, an important symbol for the community, can be found in room shapes, flooring designs, light fixtures and arrangements, furniture shapes and more. 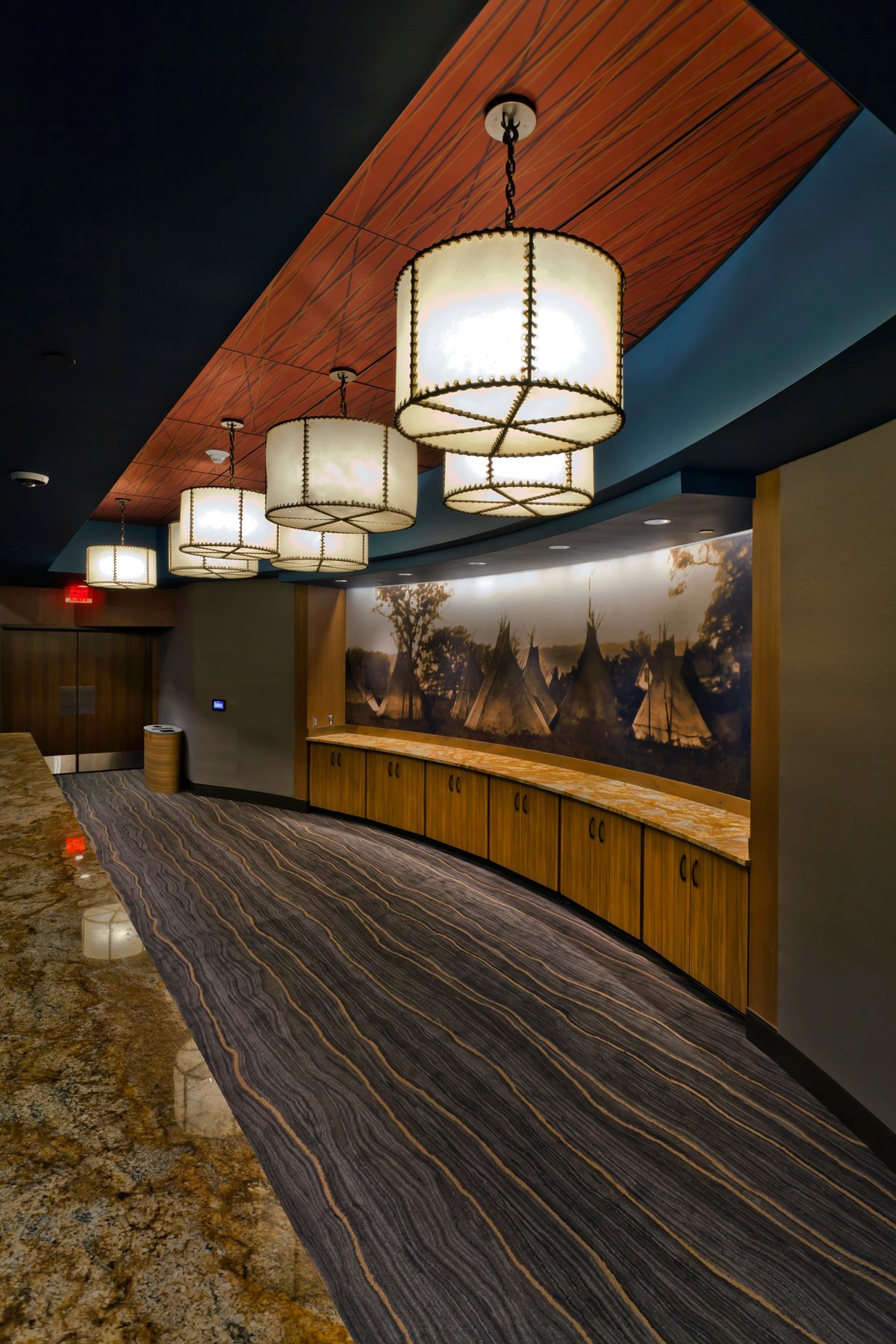 Much of the furniture was custom designed and built for the space. 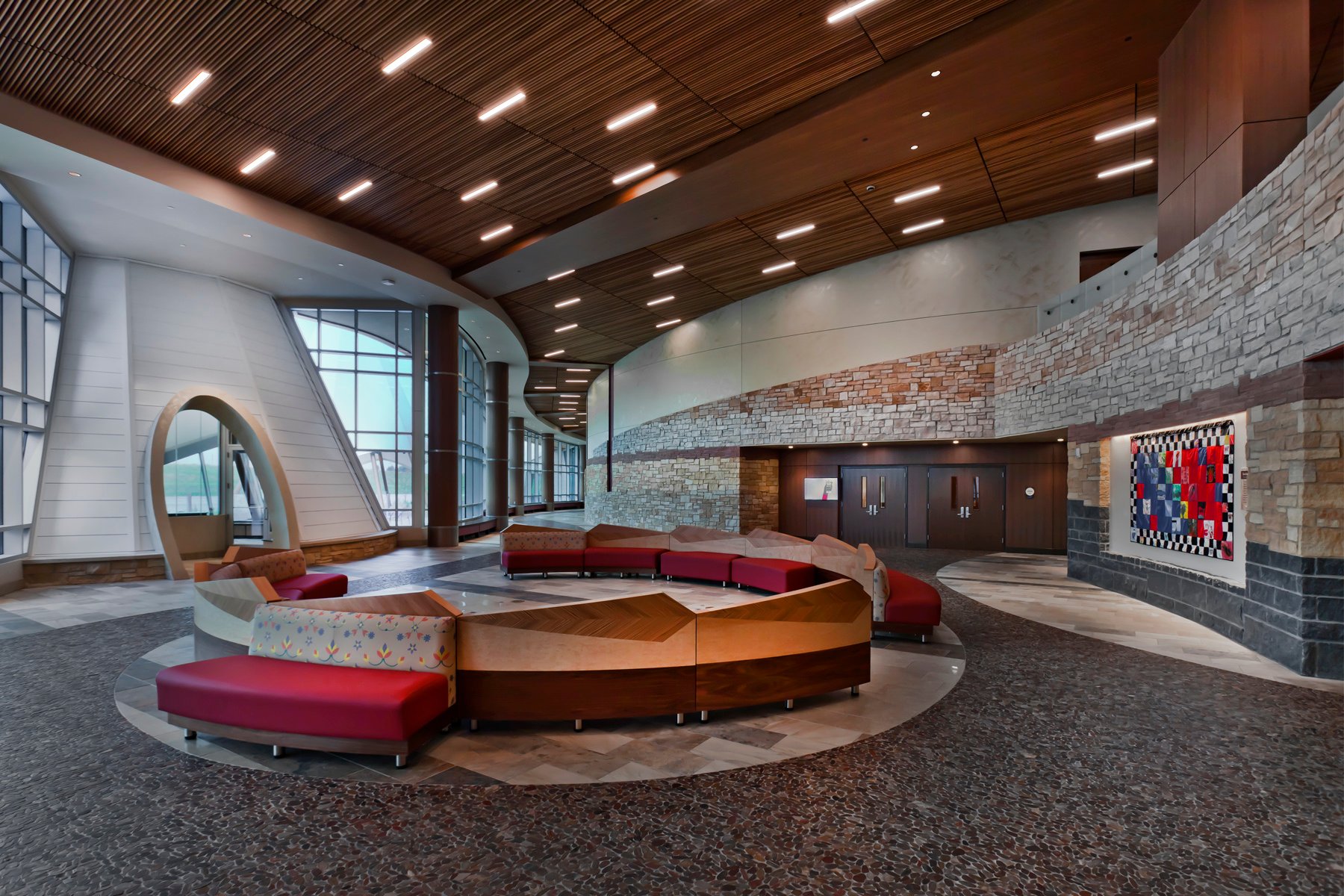 Everything from the carpets to the tile patterning was selected to evoke the natural world and highlight symbols of cultural significance to the community. 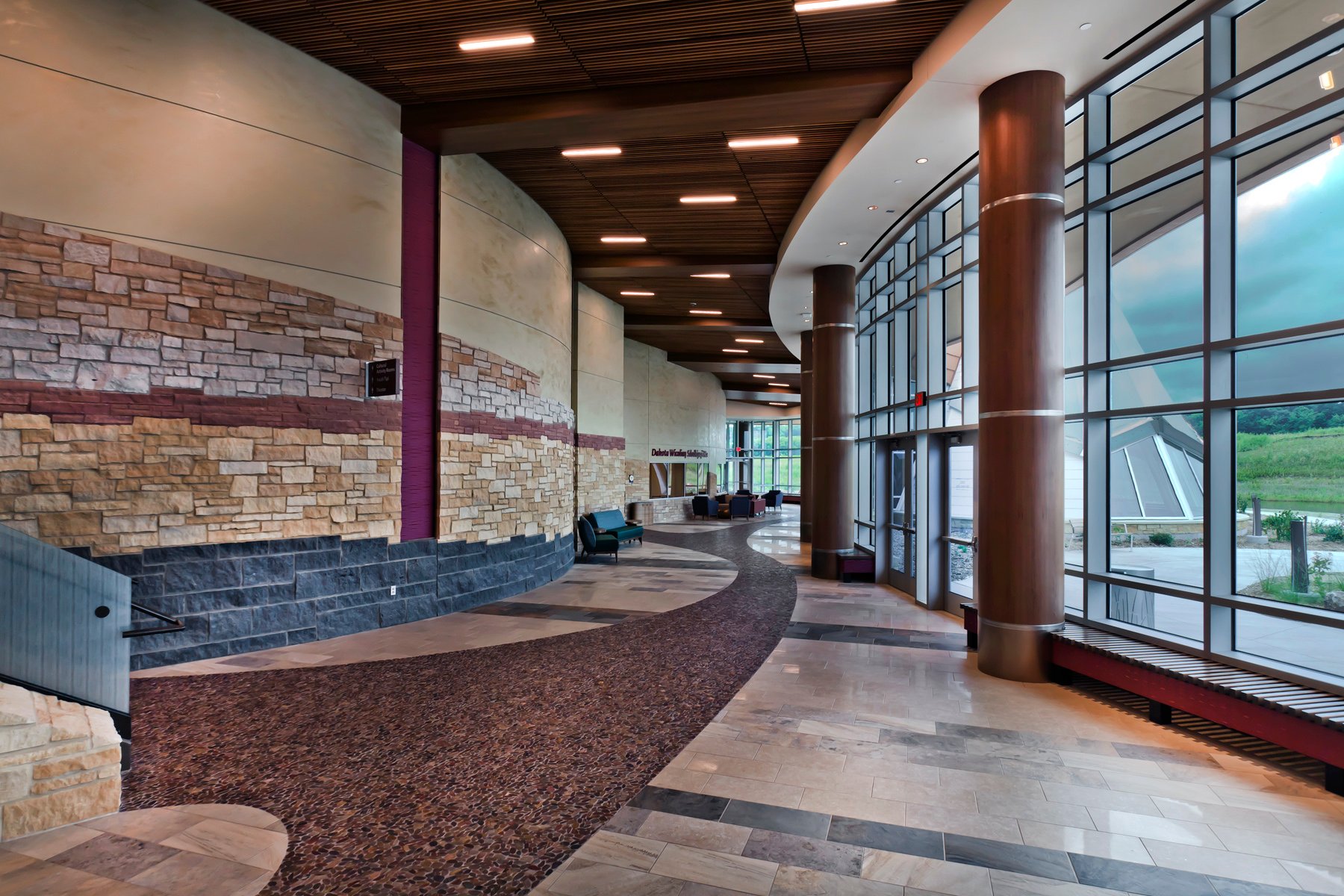 A project of this magnitude takes many years and many hands. We would like to thank the many partners that came together to bring this space to life.

Of course the greatest partner on this project, whose perseverance, dedication, passion and belief made Hoċokata Ti possible, is the Shakopee Mdewakanton Sioux Community. They are the community for whom this building exists. It operates as a museum, as a meeting place, a celebration space, a foundation of education and tradition meant to serve current and future generations.

As architects to the Shakopee Mdewakanton Sioux Community for the past 30 years, we've worked together to bring numerous structures to the community. And we look forward to our continued partnership. Thank you for inviting us to have a part in bringing Hoċokata Ti to life.

Published on February 16, 2021 by Rob Brandwick